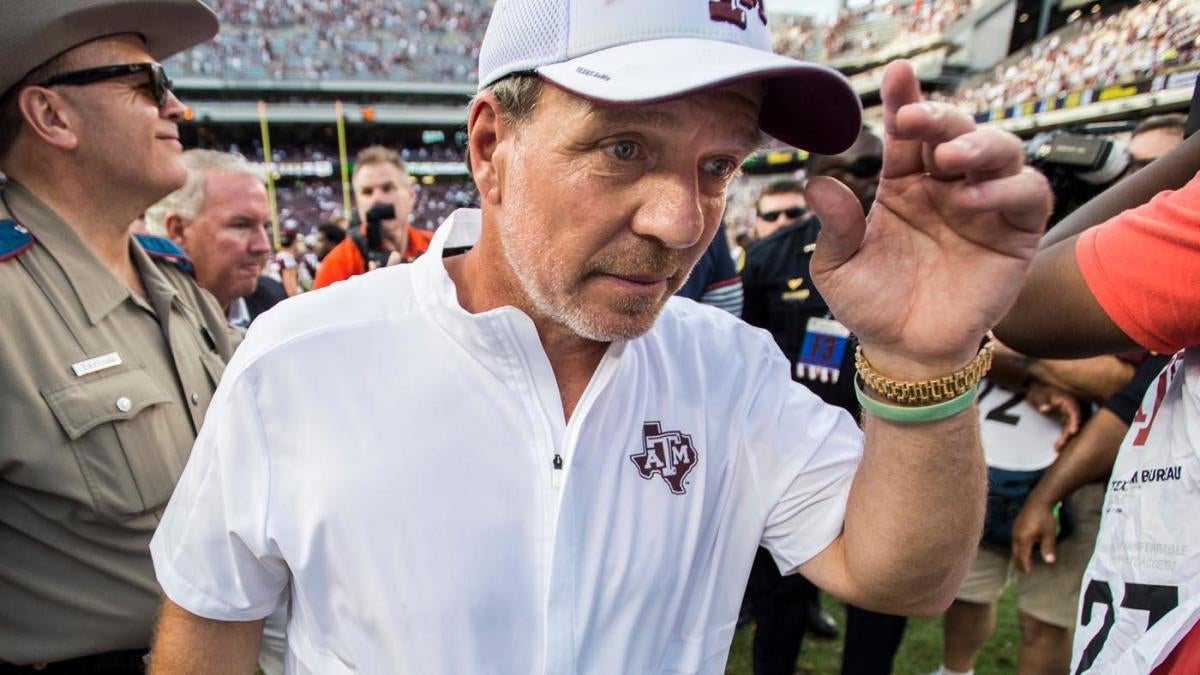 Through two seasons, though, Fisher’s record in College Station has been very Sumlin-ish. His 17 wins in two seasons are three fewer than Sumlin had during his first two seasons and only two more than Sumlin tallied during his final two seasons in Aggieland. Let’s take a deeper dive into where Texas A&M has ranked in the SEC over the last five years as the eras of Sumlin and Fisher have crossed paths.

Fisher made his mark in the coaching world as an offensive wizard — specifically developing quarterbacks. He simply hasn’t shown that ability over the last two seasons, though. Quarterback Kellen Mond threw more touchdowns (24) and had a higher passer rating (134.98) as a sophomore under Fisher in 2018 than he did as a junior in 2019 (20 touchdowns and a 131.11 rating).

That’s not to say that Mond and Fisher can’t turn things around in 2020. Maybe they can. But Fisher isn’t being paid to keep things in neutral — which is exactly what has happened through two seasons.

Worth the $75 million price tag? Not yet. Not even close.

“Yet” is the operative word entering the 2020 season, however, because the window is wide open in the SEC West for the Aggies to waltz through and become relevant in college football’s toughest division.

I’m not the biggest “returning starters” advocate. Sure, experience sometimes matters. But other times, an experienced roster might be loaded with players who have long since reached their football peak. This year is different, though. The COVID-19 pandemic has wreaked havoc across the college football landscape by canceling spring practices, delaying offseason conditioning and preventing coaches without roster experience from developing rough drafts of their depth charts heading into August.

The Aggies return 16 starters, which ties for most in the SEC. They have the most experienced quarterback in the conference in Mond, four starters on the offensive line, wide receiver Jhamon Ausbon (872 yards in 2019) and a veteran front seven led by defensive lineman Bobby Brown III and linebacker Buddy Johnson.

It’s not just returning talent that makes this a vital year for Fisher to prove his worth, it’s also the talent that he has signed through three recruiting cycles in College Station.

The Aggies were ranked No. 15 in the 2017 Team Talent Rankings according to the metrics provided by 247Sports. They moved up to No. 12 in 2019 and are part of a select group of teams in Bud Elliott’s “Blue Chip Ratio” headed into the 2020 season, which includes teams that have signed more four-or five-star prospects than two-or three-star prospects over the last four recruiting classes.

The combination of experience and roster talent means that Texas A&M not only has depth but that Fisher should have already created the culture of competition that top-tier teams need in order to contend for the national title. Internally, that might be the case. But “might” has to be removed from the previous sentence, and probably should have already disappeared based upon the school’s investment in Fisher.

Coaching stability matters. Texas A&M is one of four SEC teams not to have a coordinator or scheme change during the unorthodox offseason. In theory, when fall camp cranks up, its depth chart will just need tweaking while schools with coaching and scheme changes will be scrambling just to get up to speed.

Fisher is also short on excuses in the 2020 season as a result of his primary competitors in the SEC West all facing glaring issues of their own to overcome.

LSU lost a medium-sized village of coaches and players, including 2019 Heisman Trophy winner Joe Burrow. What about Alabama? I picked Alabama to go 12-0 when we provided our record predictions in April, but it was a reluctant 12-0 given the uncertainties at quarterback in replacing Tua Tagovailoa. Auburn, meanwhile, is helped by having an established quarterback in Bo Nix, but four new starters along the offensive line and the absence of superstar defensive linemen Derrick Brown and Marlon Davidson will be next-to-impossible to overcome as a result of the coronavirus-shortened offseason.

The paths to Atlanta and beyond need to be smooth, and there aren’t many road blocks for Fisher and the Aggies. Their permanent cross-division game is an average-at-best South Carolina team, rotating cross-division game is lowly Vanderbilt and its power five out-of-conference opponent is an average Colorado team that changed head coaches. On top of that, games at Alabama and at home vs. LSU are during the final two weeks of the regular season.

What does that mean? It means that Fisher and Texas A&M should be in the thick of the SEC West and College Football Playoff races deep into the final month of the season.

Should that be enough to appease fans and administrators who expect national titles from Fisher? Yes. Whether Texas A&M is a legit contender or runs out of gas late, having a chance at college football’s ultimate prizes in November should be where Fisher’s team lands beginning this year and every season Fisher is at the helm moving forward. If this doesn’t happen, it’ll be impossible to deny that Fisher isn’t truly earning that massive paycheck.

Simply put, the 2020 season is put-up-or-shut up time for Jimbo.