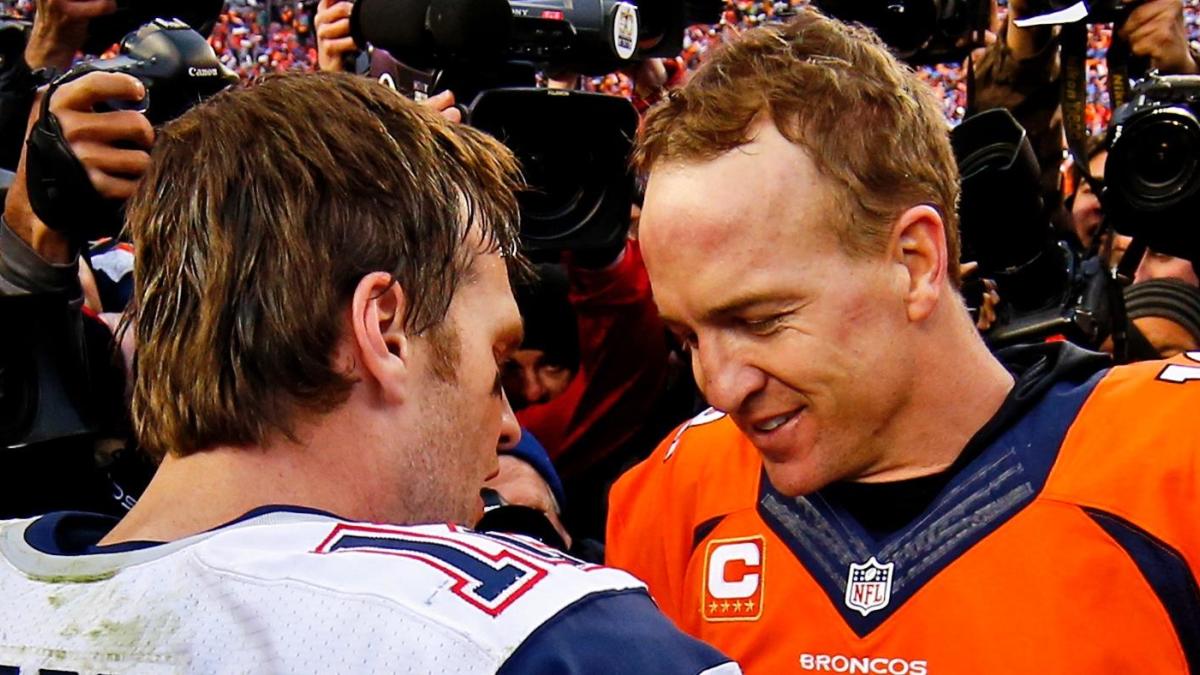 Sometime over the past year, Peyton Manning and Tom Brady decided to play a little golf in CBS Sports broadcaster Jim Nantz’s backyard. During their time together (as part of Manning’s “Peyton Places” series for ESPN), Manning and Brady ribbed each other for their golf games while also having a little fun at Nantz’s expense. They also looked back at their epic matchups against one another, matchups that helped determine NFL supremacy for two decades.

“Relationships are built on shared experience,” Brady told Manning. “And even though we haven’t had as many as these moments as we had on the game field, we still shared the same moments. There were different perspectives, but at the end of the day, when the emotions of the game wear off, you realize how special and unique they were for my life.”

While Manning has since retired, Brady continues to pursue excellence on the gridiron, as the six-time Super Bowl champion inked a two-year deal with the Buccaneers earlier this offseason. But regardless of what he may accomplish in Tampa Bay, a significant part of Brady’s legacy has already been secured, and that includes what he and the Patriots were able to do in their matchups against Manning’s teams in Indianapolis and Denver. And while they faced some stiff competition, the Manning-Brady rivalry was able to claim the top spot in the NFL’s best rivalries of the 2010s. Here’s a look at the entire list, a list that includes several other rivalries that were featured in previous decades.

The most disliked opponent Pittsburgh had during the 2010s was former Bengals linebacker Vontaze Burfict. Burfict, during a three month span in the 2015 season, hurt Le’Veon Bell’s knee, separated Ben Roethlisberger’s shoulder and concussed Antonio Brown near the end of the Steelers’ win over the Bengals in the 2015 wild-card round (Burfict’s actions during that game resulted in a three-game suspension to start the 2016 season). Two years later, JuJu Smith-Schuster received a one-game suspension after concussing Burfict during Pittsburgh’s late season win over Cincinnati on “Monday Night Football.”

While there was certainly no love lost between the two teams, it’s hard to call this a rivalry when the Steelers won 18 of the 21 games between the two teams during the decade. In fact, since Burfict and the Bengals left Pittsburgh with a win midway through the 2015 season, the Steelers have won each of their last 10 games against the Bengals, who are hoping to level the playing field after drafting quarterback Joe Burrow with the No. 1 overall pick in the 2020 draft.

Unlike their matchups during the ’90s, the Packers won the majority of their games against the Cowboys during the ’10s, as Aaron Rodgers and company played a significant role in denying Tony Romo and the Cowboys a Super Bowl berth during the decade.

Cowboys fans still haven’t gotten over Dez Bryant’s controversial non-catch in the Cowboys’ 26-21 loss to the Packers in the 2014 postseason. Making the pill even tougher to swallow is the 2018 rule change that, had that game taken place today, would have deemed Bryant’s play a completed pass. One year later, the favored Cowboys – led by rookies Dek Prescott and Ezekiel Elliott – went toe-to-toe with Rodgers and Green Bay’s offense. But after tying the score with 40 seconds left, Dallas’ defense could not contain Rodgers, whose 36-yard completion to Jared Cook set up Mason Crosby’s game-winning field goal as time expired.

Both games not only added to the Cowboys’ collective heartache, it also added more layers to the already rich history of this rivalry.

If there’s one AFC coach that’s consistently managed to give the hoodie fits in the playoffs, it’s Ravens head coach John Harbaugh, who has managed to win two playoff games against Bill Belichick’s Patriots. Harbaugh, Baltimore’s coach since 2008, won his first playoff game against Belichick in 2009. And while they were unable to duplicate their regular season success during the postseason, Lamar Jackson’s success against Belichick’s defense in Baltimore’s regular season stomping of New England last season appeared to foreshadow a possible changing of the guard as it relates to the balance of power in the AFC moving forward.

New England and Baltimore’s duel in the 2011 AFC title game goes down as one of the decade’s greatest games. In a game that witnessed eight lead changes, the Ravens took a 20-16 lead into the fourth quarter after a third down sack of Flacco forced Baltimore to settle for a Billy Cundiff field goal. After a quarterback sneak by Tom Brady gave the Patriots a fourth quarter lead, Flacco drove the Ravens to the Patriots’ 14 with 27 seconds left. But after a dropped pass in the end zone on second down, Baltimore’s season ended when Cundiff missed his 32-yard attempt with 15 seconds remaining. The Ravens extracted a measure of payback during the following year’s AFC title game, as Baltimore defeated the Patriots in Foxborough before beating the 49ers in Super Bowl XLVI.

The two teams faced off in another classic showdown during the divisional round of the 2014 playoffs. Despite enjoying leads of 14-0 and 28-14, the Ravens never completely distanced themselves from the Patriots, who tied the score at 28-all following Danny Amendola’s 51-yard touchdown reception from Julian Edelman. The Patriots took their first lead after Brady hit Brandon LaFell for a 23-yard score with 5:13 left. Down by four, five completions by Flacco moved the ball from Baltimore’s own 11 to the Patriots’ 36-yard line. The drive stalled there, however, as Duron Harmon’s pick of Flacco sealing New England’s 35-31 victory. The Patriots would go onto dethrone in the Seahawks in Super Bowl XLIX, the first of three Super Bowls for the Patriots during the decade.

No. 2 on our recent list of the NFL’s greatest rivalries from the 2000s, the Ravens-Steelers rivalry was nearly as good in the 2010s. Not only did the Ravens win their first ever decade against the Steelers (as far as win-loss record is concerned), Baltimore also won their first-ever playoff game over Pittsburgh, as Joe Flacco led his squad to a 30-17 win over the Steelers in the 2014 AFC Wild-Card round.

Four years earlier, the Steelers – similar to what they did in 2008 – pulled off two improbable wins over their arch rival. Trailing the Ravens late in a Week 13 matchup in Baltimore, Troy Polamalu’s forced fumble of Flacco set up Ben Roethlisberger’s game-winning touchdown pass that helped the Steelers win the division. Six weeks later, after falling behind the visiting Ravens, 21-7, in the divisional round of the AFC playoffs, Roethlisberger’s 58-yard completion to Antonio Brown with just over two minutes left helped cap off Pittsburgh’s come-from-behind victory.

While these games were classics, it’s impossible to pick against the 2016 Christmas Day showdown as the decade’s best game between the two franchises. In front of a national TV audience, the Ravens built a 20-10 point lead before a pair of Le’Veon Bell touchdowns put Pittsburgh in front. After the Ravens re-gained the lead with 1:18 left, seven completions from Roethlisberger set up his game-winning touchdown pass to Brown with just four seconds left. The catch, referred to in Pittsburgh as the “Immaculate Extension,” clinched the division title for the Steelers while eliminating Baltimore from postseason contention.

The NFL’s best divisional rivalry during the 2010s, the 49ers and Seahawks combined to win seven AFC West division titles, four NFC titles and one Super Bowl during the decade. This past season, the 49ers edged the Seahawks in Week 17 to capture their first division crown since 2012 while also clinching home-field advantage throughout the playoffs. The 49ers parlayed their home-field advantage into a trip to Super Bowl LIV, where they fell to Patrick Mahomes and the Chiefs, 31-20.

San Francisco won four of their its first five matchups against the Seahawks at the start of the decade before things began to shift in 2012, Russell Wilson’s rookie season. After splitting their regular season matchups in ’12 and ’13, the Seahawks hosted the defending NFC champion 49ers (who had appeared in the previous two NFC title games) in the 2013 NFC Championship game. In what is regarded as one of the most physical championship games in recent memory, the 49ers took an early 10-0 lead before the Seahawks tied the score on a 40-yard run by Marshawn Lynch. San Francisco re-gained the lead when Colin Kaepernick hit Anquan Boldin for a 26-yard touchdown midway through the third quarter.

Three unanswered scores by the Seahawks gave Seattle a 23-17 lead with 3:43 left. After driving the 49ers to the Seahawks’ 18 with 30 seconds left, Kaepernick tried to hit Michael Crabtree in the back corner of the end zone. Unfortunately for Kaepernick, cornerback Richard Sherman, a future 49er, tipped the pass before it was intercepted by Bobby Wagner, sealing Seattle’s first NFC championship win since 2005. The Seahawks, who would then ambush Peyton Manning and the Broncos in Super Bowl XLVIII, would own their rivalry for the next five years, winning 10 straight games against San Francisco. The 49ers ended the decade on a positive note, however, winning two of their final three games against the Seahawks.

We get it, you’re probably experiencing Manning-Brady fatigue after reading our recent post about their epic matchups during the 2000s. The Peyton Manning – Tom Brady matchups during the 2000s helped produce some of the decade’s most memorable moments. That was again in the case in the 2010s, as Manning – then with the Broncos – and Brady dueled in three of the decade’s best games.

Ironically, it was the Patriots’ 45-10 thrashing of Tim Tebow’s Broncos in the 2011 divisional round that helped convince Broncos president John Elway to make a significant upgrade at the quarterback position that offseason. Elway did that and more, signing Manning (who was recently released by the Colts following an injury-marred 2011 season) to a four-year deal. While Manning instantly made the Broncos a Super Bowl contender, they still could not figure out the Patriots, who defeated the Broncos in the 2012 (Manning’s first season in Denver) and ’13 regular seasons. New England’s 34-31 Week 12 win over Denver in 2013, which saw the Patriots overcome a 24-0 deficit, was one of the greatest comeback victories of the decade.

Denver would rebound in the playoffs, however, as Manning led the Broncos to a 10-point win over the Patriots in the ’13 AFC title game. Two years later, the two teams faced again in Denver for the right to go to the Super Bowl. Manning, despite losing much of his fastball at this late stage of his career, came out throwing, hitting Owen Daniels on a pair of touchdown passes to give the Broncos an early lead. The two teams exchanged field goals until Brady, down eight points with 1:34 left, hit Rob Gronkowski for a 40-yard gain on fourth-and-10. Four plays later, the duo connected again on fourth down, with Gronkowski beating Chris Harris to snare in Brady’s end zone pass. Denver’s defense, historically good that season, came through on the Patriots’ two-point conversion attempt, as former Patriot Aqib Talib tipped Brady’s pass (intended for Julian Edelman) into the arms of teammate Bradley Roby.

The Broncos’ 20-18 victory went down as arguably the decade’s greatest conference title game. It also marked the end of an historic rivalry between the era’s two best players, as Manning hung up his cleats for good after the Broncos defeated the Panthers two weeks later in Super Bowl 50.